I teach and research primarily in the area of Latin American cultural history, though my work ranges from Argentine film history to 19th and 20th-century literary texts from throughout Latin America and to Spanish experimental film. It has been published in Journal of Latin American Cultural Studies, Modern Language Notes, Hispanic Review, Revista de Estudios Hispánicos, Anales de la Literatura Española Contemporánea, Journal of Spanish Cultural Studies, Film Quarterly, Cineaste and elsewhere. I serve on the Editorial Board of Chasqui: Revista de Literatura Latinoamericana. My Ph.D. in Romance Languages and Literatures is from UC Berkeley (2009).

My first book, The Projected Nation: Argentine Cinema and the Social Margins (SUNY Press, 2018), examines the representation of national space in Argentine cinema. It opens with an account of canonical 19th-century literary and visual representations of the nation, which frames the subsequent examination of Argentine film from the silent period until the present. The nation’s culture has long tended to marginalize or deny the existence of certain spaces and peoples, and while cinematic representations have often reiterated these denials, at times they have exposed them as such, altering the possibilities of imagining the nation and, as a result, becoming intensely contested. The book’s selection of both canonical and lesser-known films accounts for the varied representations of the nation’s marginal spaces through time and the specific commercial and political pressures that conditioned these.

Many of the films discussed in The Projected Nation can be viewed here, with optional English subtitles:

My second book, Before Bemberg: Women Filmmakers in Argentina (Rutgers University Press, 2020), complicates the historiography on Argentine women filmmakers that has centered on María Luisa Bemberg to the exclusion of her predecessors. Its introductory discussion of the abundant initial participation by women in film production in the 1910s is followed by an account of exclusion from creative roles in the studio cinema, which was only altered by the opportunities presented by a boom in short filmmaking in the 1960s. The book then discusses in depth the six sound features directed by women before 1980, which, despite their trailblazing explorations of the perspectives of female characters, daring denunciations of authoritarianism and censorship, and modernizing formal invention, have been forgotten by film history. The book thus recognizes the works of Vlasta Lah, María Herminia Avellaneda and María Elena Walsh, Eva Landeck and Bemberg.

The films discussed in Before Bemberg can be viewed here, with optional English subtitles:

My third book project is tentatively titled The Recuperation of the Margins: Argentine Commercial Cinema's Response to Militant Film. This study puts the politicized New Cinema in dialog with a seldom-examined contemporary, the commercial narrative cinema of the 1960s and '70s. Where the former represented the social margins critically, the latter responds to the undeniability of the existence of these spaces by representing them through various strategies that tend to render them politically inert. Articles published in the Journal of Latin American Cultural Studies and Modern Language Notes.

Member of Editorial Board of Chasqui: revista de literatura latinoamericana 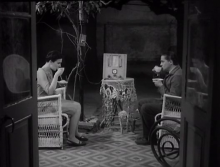